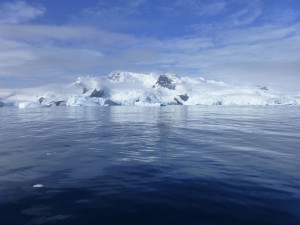 Antarctica is largely untouched and entirely spectacular. It is the great white seventh continent and one of the last true wilderness areas on earth. It is a largely barren, seemingly inhospitable and frigid place, where tenacious seabirds, seals, whales, penguins and other animals thrive. It is the world’s most pristine, exotic and unforgettable natural environment. When you leave Ushuaia, you sail through the historic Beagle Channel, winding your way through the Tierra del Fuego archipelago at the southernmost tip of the South American Continent.

Crossing the Drake Passage between Cape Horn and the Antarctic Peninsula holds a unique place in maritime lore. Sometimes misty and grey, other times calm and clear, crossing this legendary passage is unforgettable – a milestone in an adventurer’s personal travel history. My crossing was far from a millpond. We endured 12 meter plus swells and a 55 knot howling westerly wind for 36 hours. We were confined to cabin for 24 hours. Our ship took a battering, but we didn’t.

When the Antarctic Convergence is left behind, it is easy to begin to appreciate why this region has long captivated the attention of explorers and travellers alike.

From challenge to ecstasy in 24 hours – that is what Antarctica will give you.

The seventh and southernmost continent was the last to be discovered and remains a source of fascination and inspiration to all who encounter it. The South Shetland Islands and the Antarctic Peninsula offer silence. They offer serenity and most of all, they offer spectacular scenery. The majesty of the Peninsula’s mountains will inspire you as you scramble up snowy pathways to vantage points offering amazing vistas. 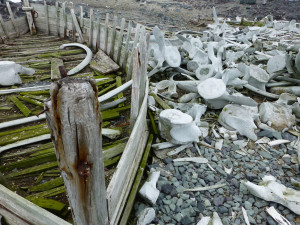 Thankfully, there is little evidence of man’s activity in these parts. Scientific research stations dot the coast, some standing on the sites of former whaling stations. Evidence of man’s use of the land is well preserved by the harsh, dry conditions. It is a heavy footprint, now strictly monitored by the International Association of Antarctica Tour Operators, to promote and practice safe and environmentally responsible private-sector travel to the Antarctic.

My arrival on the Peninsula was the first time we experienced the unique Antarctic grey, where the sea meets the sky like an infinity cove with icebergs seemingly suspended in a continual backdrop. Once the cloud lifted, so did the mood. The buoyancy of blue sky and sunshine revealed breathtaking snow-covered mountain ranges. The new light allowed the magic of the towering icebergs come to life. The exquisite natural sculptures showed us every shade of white, grey and blue. We studied the layers of the ice and marvelled at glimpses of nature frozen in time. On its’ way down a glacier, ice captures pieces of rock and sometimes animals, all snap-frozen and preserved until the sun’s warmth and the ocean movement eventually melts the ice, revealing it’s precious cargo.

There is a very special sound of the groan, thunder, roar, boom and crack of ice calving from a glacier. The sight of such an event is an added bonus. As with the colours of the bergs, glaciers too can dance with colour. Its’ mood changes with the gloominess of a misty grey sea fog or the intense clarity and brilliance of bright sunshine. 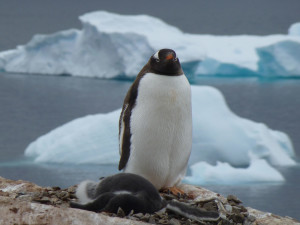 The amazing colonies of Chinstrap, Gentoo, Macaroni and Adelie penguins provide constant amazement. Seemingly very rigid and awkward, these gorgeous little creatures are very amusing. They are surprizingly quick when walking and soon let you know if you are in their way. They are very inquisitive and often approach you when you least expect it. The aroma of their rookeries is an indelible memory.

Hump-back and Minke whales thrilled us with their playful antics, coming right along the side of the zodiacs, seemingly peering at us, and even rubbing against it. Despite their size, they are very graceful and seem to enjoy interaction. The seals, whales and penguins are the only permanent residents of Antarctica.

Hiking to the summit of mountains, camping on the ice, enjoying a midnight-sun zodiac cruise, marvelling at the sea life along the shore, feeling the warm thermal waters in Deception Bay, listening to the entertaining and informative lectures given by the expedition team, indulging in beautiful meals and being very comfortable and cosy aboard your small expedition ship – these are all the things that make each voyage to Antarctica unique.

Amidst the serene silence of Antarctica, noisy interludes become lifelong memories – such as penguins squabbling over prized pebbles or the boom and crack of a glacier calving. When the Antarctic grey lifts, clear, spectacular sights abound. Please, consider exploring the ‘Land of Extremes’. It will awaken you in every way.